As noted during the unveiling of the car at the Diablo Test Track on June 22, 1964, the BART car was to represent the best of BART, and functions as a symbol of the entire BART project. As said by General Manager B.R. Stokes:

This design car epitomizes more than anything else our goal of providing the most comfortable, fastest, safest and most economical means of interurban transportation the world has ever known.

Our entire purpose in life, our only reason for existence, is to produce a system so inviting that Bay Area travelers will choose to ride the 80 mile-an-hour trains instead of adding to the traffic congestion that has had such an undesirable effect on our urban way of life…

The car we have unveiled here today is destined to establish an exciting new trend in rapid transit conveyances…This is not just a warmed over version of an existing commuter train. It's entirely new - the first in over a quarter of a century. There's nothing to compare it with for comfort and luxury, except possibly a jet airliner or the most expensive automobile.

Designer Carl Sundberg explained the design process of the car. The following is a transcription from his own words:

…Situated as we are in the heart of the automobile industry, our people are vitally aware of the importance of good vehicle design. We tried to employ the talent and knowledge we have gained here to produce for the Bay Area people a design that transcends anything yet conceived in the field. For us, it was labor of love.

We began the design process with the most essential ingredient, the human being, tailoring all elements to his or her needs. We knew, also, that the people of the Bay Area traditionally accept newness, that they do, in fact, hunger for innovation.

We gave the nose a sophisticated, sculptured look, yet we kept it simple; we used no gimmicks or clichés strictly for the sake of appearance. We wanted a modern vehicle, yet we stuck to the contention that a rapid transit train should look like a rapid transit train, and nothing else.

We wanted the car to appeal to all ages and walks of life, so we gave it a fleet look to reach the younger generation, yet a solid, practical, even dignified look to appeal to adults.

It was our purpose to make the interior of the car, as well as the exterior, competitive in design and comfort features with the most expensive automobile.

The 1.10 car mockup was displayed across the San Francisco Bay Area before the opening of the system. Hundreds of thousands of future riders provided their comments to help shape the human element of the BART railcar. The mockup also trekked down to Los Angeles, to help drum up support for a heavy rail system in their vicinity.


On the technical side, the BART car was designed to be the most advanced rapid transit car ever built.

The automatic train control (ATC) system was designed to run trains at speeds up to 80 mph between stations, and bring them to a stop with the precision of plus or minus six inches. BART was the first rapid system to have the merging of multiple lines under ATC.

The car was built using extruded aluminum, contrasting to traditional sheet metal construction. These extruded aluminum pieces were combined to form a monocoque body shell. Although a rather new process for rail transit, these were proven techniques for the aerospace and aircraft industries.

All matters of truck design were considered as part of the Diablo Test Track project. By the time the revenue cars were built, the BART car was equipped with cast steel LFM-Rockwell inboard bearing trucks. The cars were equipped with automatically leveling air bag suspension, in addition to rubber bumpers, for a smooth ride.[5]

The high performance characteristics of BART required a new propulsion system. Taking advantage of recent developments in chopper control and increases in thyristor ratings, the BART car became the first rapid transit car to employ such a system. Hydraulic disk braking was used on the cars, an offshoot of the technology developed for off-highway trucks and aircraft landing gear.

Together, the carbody, sans undercar equipment, weighed about 200 pounds per linear foot. The cab-equipped A car, with all equipment and empty of passengers, weighed approximately 59,000 pounds, while the cabless B car, similarly empty, weighed approximately 57,000 pounds. The respective weights per linear foot of car length (786.6 lb and 814.3 lb respectively) placed the BART cars as among the lightest rapid transit cars ever made.

The interior was designed to be relatively comfortable, and early reports firmly state the importance of a clean and pleasing interior for “evening and Sunday trips - to the theater for example – and by ladies in midday for shopping, etc.” The BART car was to have a positive and dignified look, neither extravagant nor draconian, but realistic to both the requirements for the wear and tear related to the operation of a transit system and the goal of competing against the commuter automobile, including the factor of comfort. The large windows, air conditioning, end-to-end carpeting, 72 upholstered seats, modern lighting, and other features all contributed to the idea that the BART car was to be a “public asset and a source of pride.”

In all, the design of the BART car combined both desires to provide a comfortable vehicle and a technologically advanced car in an attractive package. Certain aspects of the car would become industry standard, while other aspects were to be left as BART-only curiosities.

Click on each photo to view the full size image and credits. 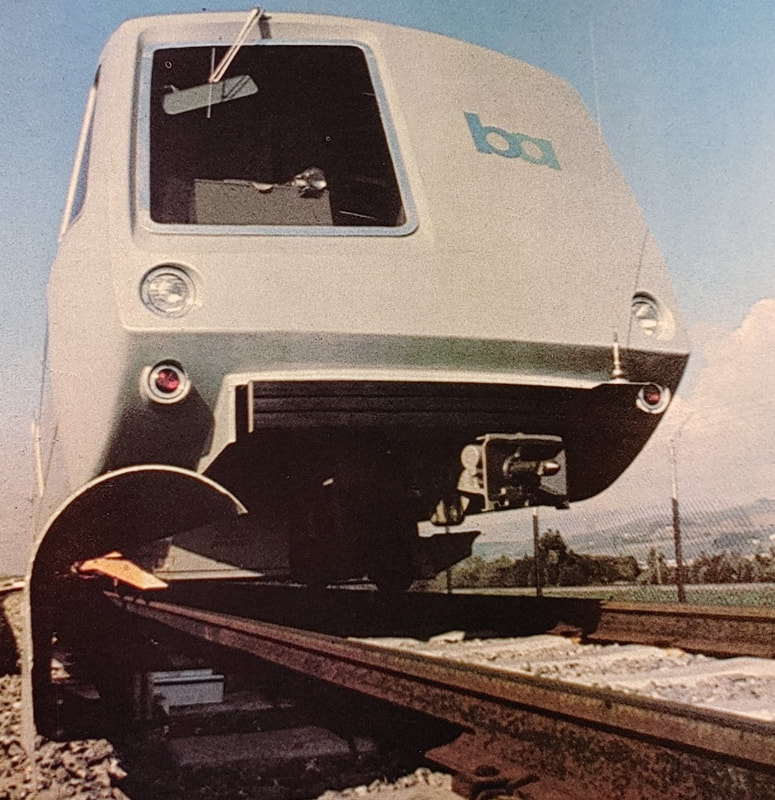 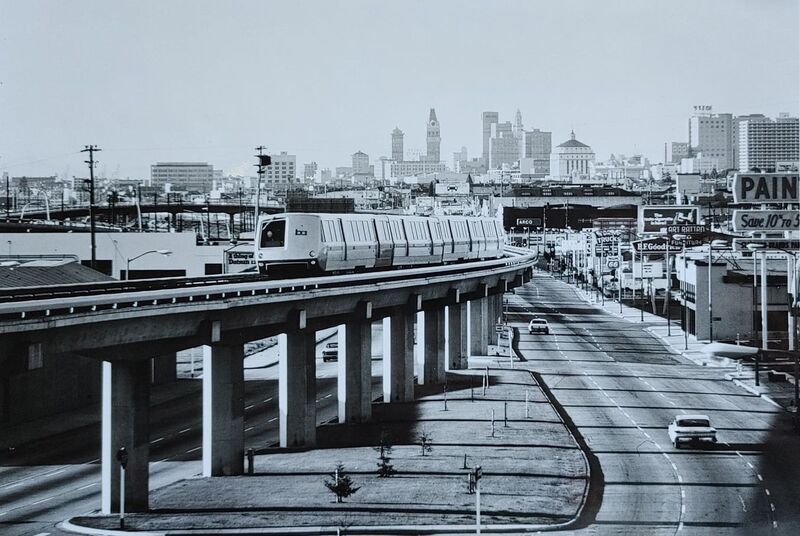 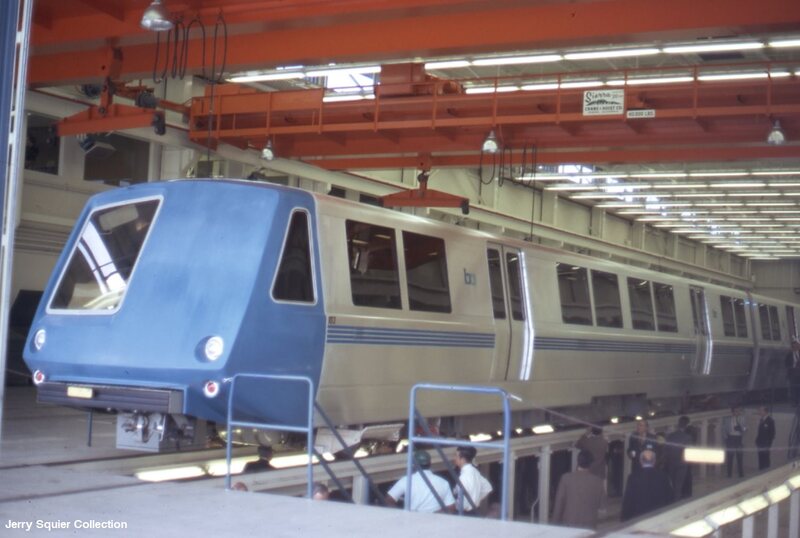 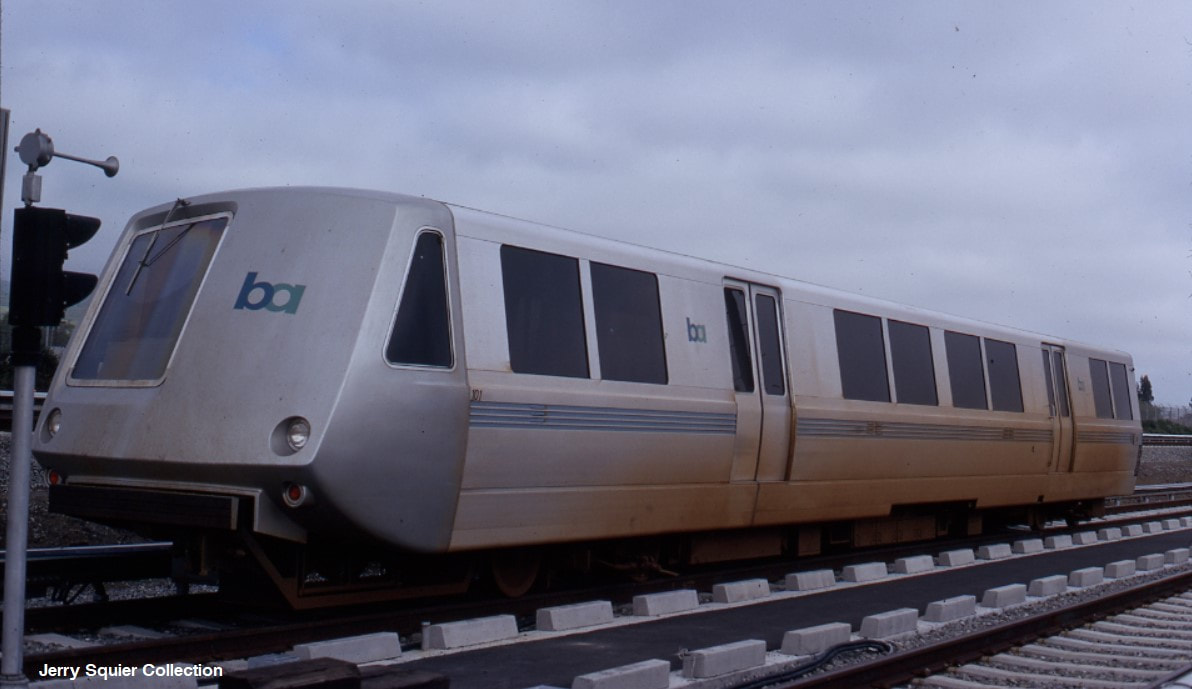 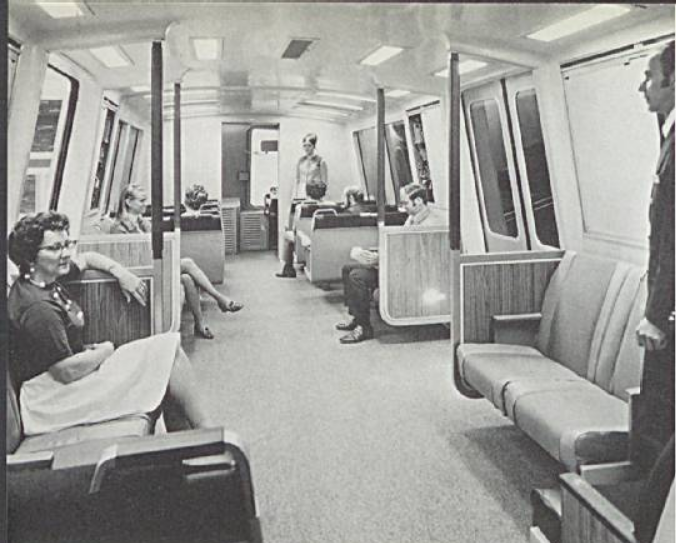 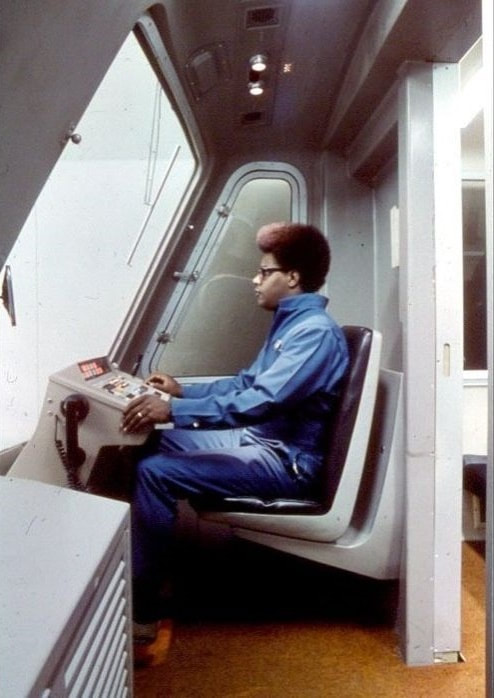 These are the first cars of the legacy fleet, and even one of these A cars remains in service today.

The prototype program aimed to resolve planned and unplanned “bugs” of these new cars – from their construction, to their troubleshooting, in a similar vein to prototype aircraft (according to the Rohr car report).

The most striking aspect of these cars, in contrast to the production cars, were the liveries. Their logo, if included, was a lighter blue "b" with a teal "a," and no "B A R T" lettering.

Cars 103 and 105 were involved in a collision on November 2, 1971 – a two car train under manual control collided with a parked two car train. The attendant was injured, and the two colliding cars were written off.

The A cars – 101, 102, 104, 106 were scrapped after the competition of the prototype program. (A local newspaper called them “incomplete aluminum bodied cars, dented and battered by months of extensive testing…” (Demoro “BART Open House” 9/25/1971).

The production A cars of the first BART revenue car order were built between 1971 to 1973. 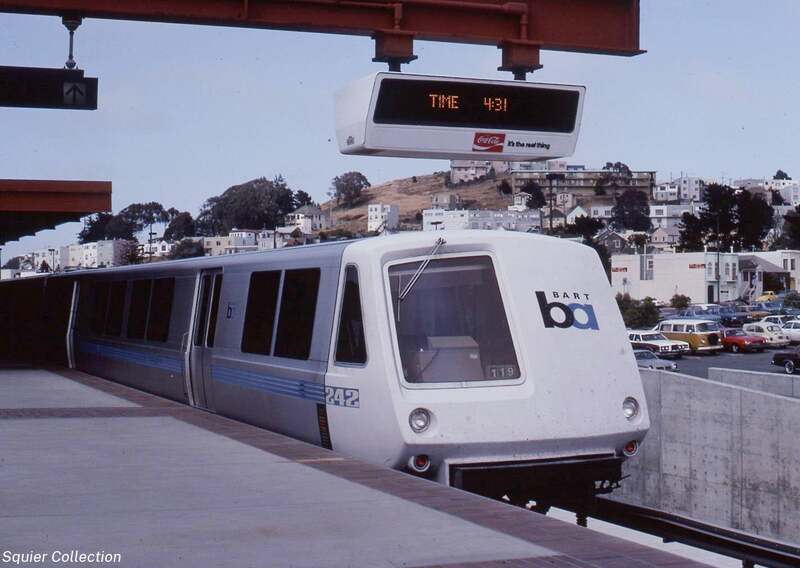 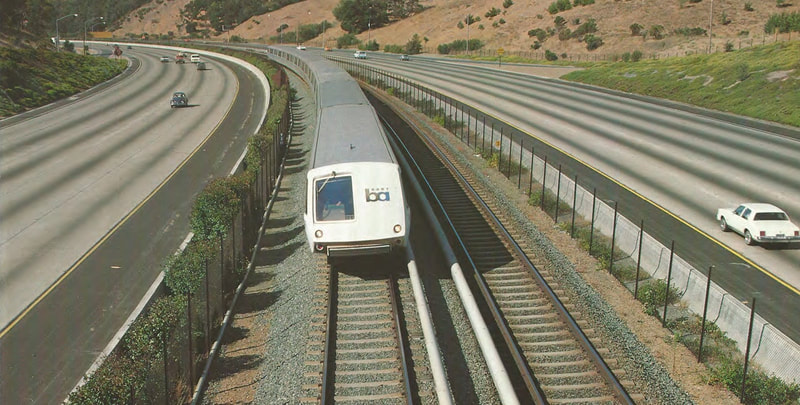 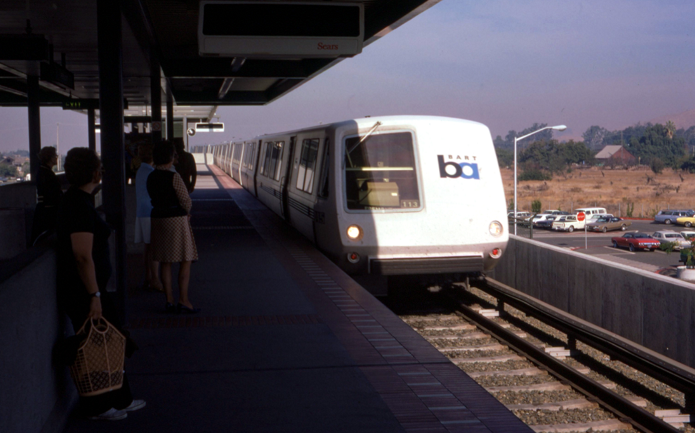 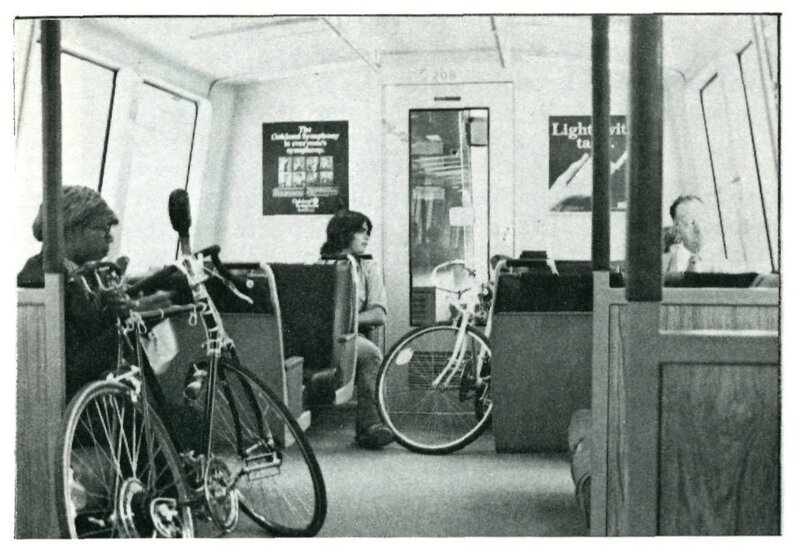 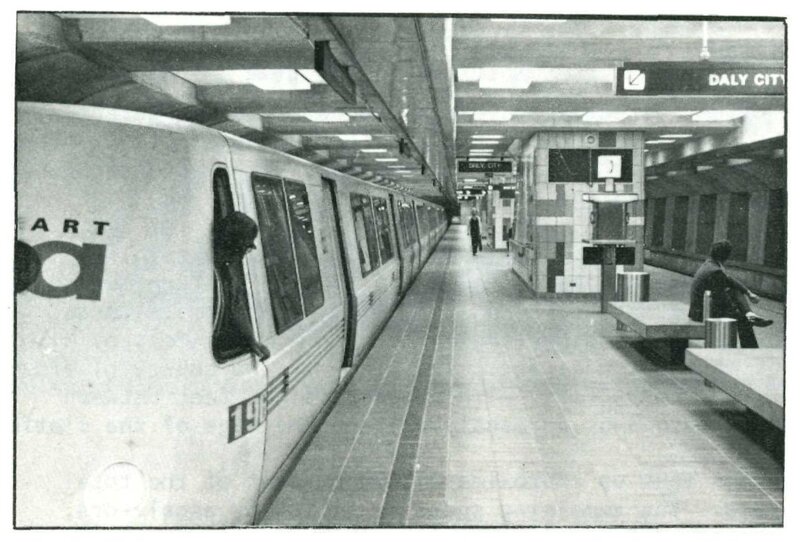 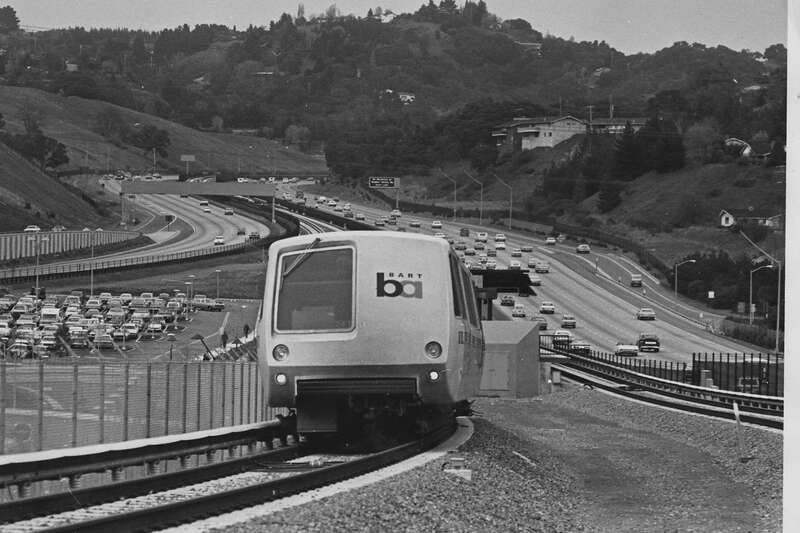 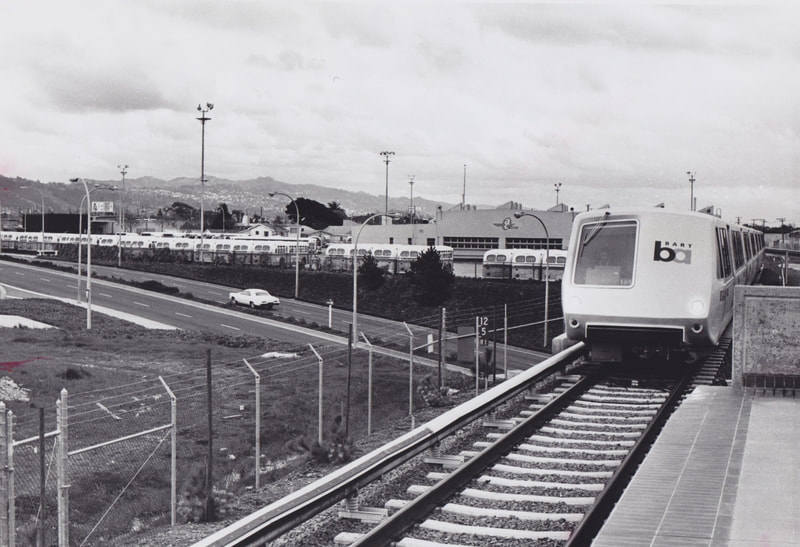 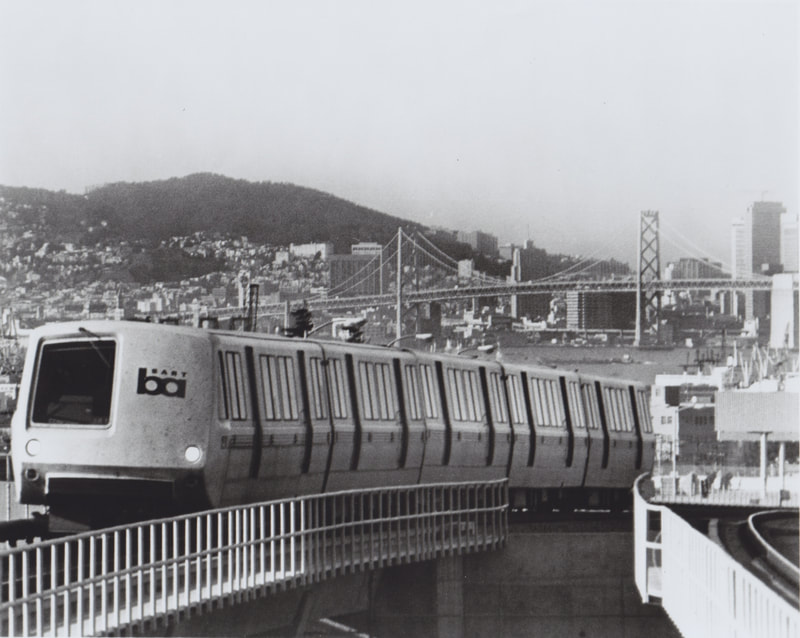 Click on each photo to view the full size image and credits. 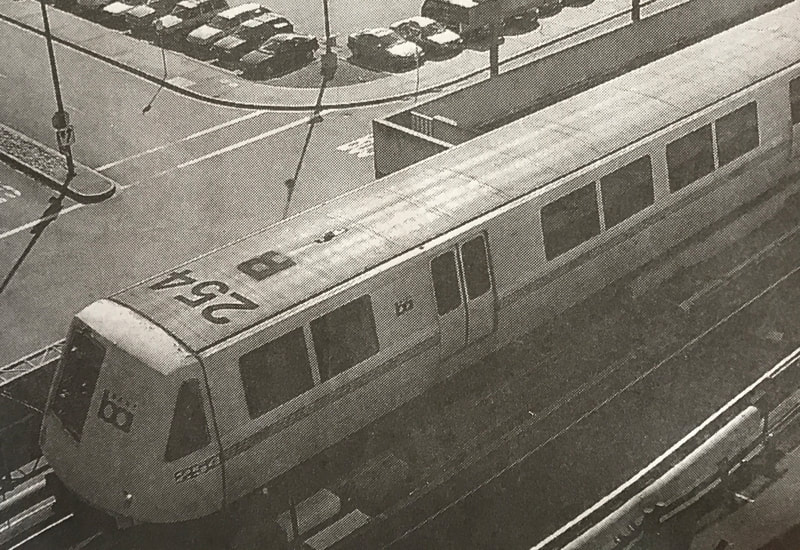 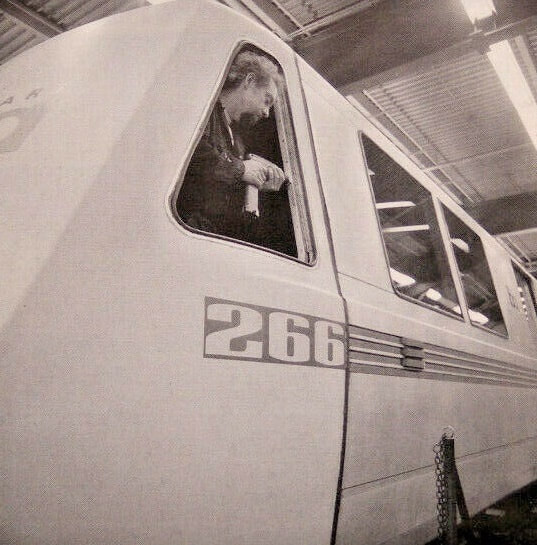